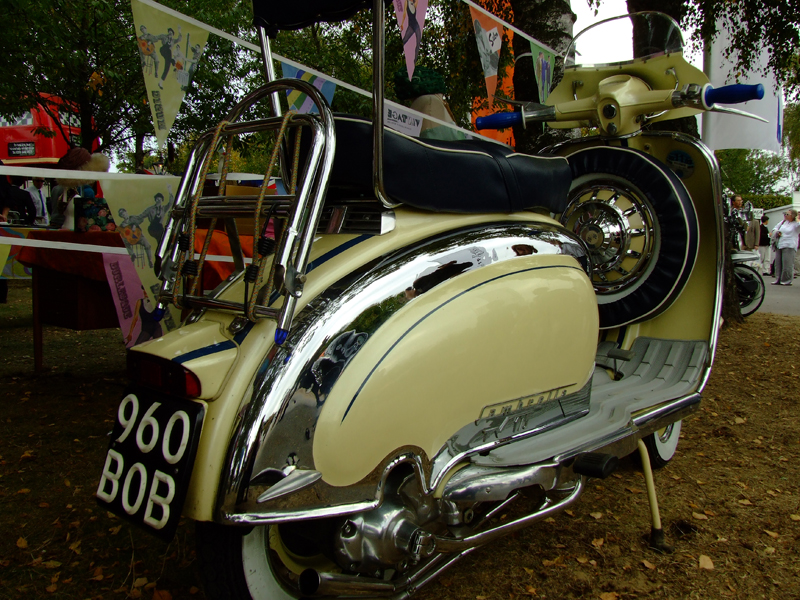 Last Sunday myself, Luke and Orla went to Goodwood Revival 2009 at Goodwood, naturally. Now, we don’t normally do the Revival because having been once before (we are locals), we didn’t really enjoy it as much as the Festival of Speed, reasons why will be explained later.

We were meeting our friends Nick and Rachel, to which I looked forward as I had not seen them since Orla’s Christening, and we had not been able to make their wedding two years ago, due to Orla being in hospital. Nick’s Uncle was there as an exhibitor and had given Nick free tickets for us.

We got there quite late in the morning, standard procedure for us, but at least I remembered to take my camera. Good.

We parked and made our way through the ‘pre 66′  field filled with the most amazing classic English and American cars.   I took a couple of pics, though decided to wait. We met Nick and Rachel, got our tickets and made our way into the event. The first thing that met our eyes was the steam Carousel. This was the third event this year at which this Carousel has been present, and to Orla’s joy, not only that..but a Helter Skelter. Naturally Orla was keen.  She did get to have a go later on with her Daddy, and it was a first for both of them.

As I expected fab vintage and retro costumes abounded, gorgeous cars and bikes, happy people and the sounds of powerful engines . I loved it, only marred by…the wealthy people.

Luke later tells me,  a Hooray Henry in plus fours with his two kids was walking along and saw this huge guy, big muscles sporting a vest (because it was hot) with his mates pushing his littelun along in a stroller. Hooray Henry starts shouting at his kids (Hoorays are generally quite loud)  “Look at the big muscle man…look at his huge muscles..children, look at the huge muscle man” over and over again. Now, apparently muscles man was Eastern European and him and his mates just stared, and Luke is thinking…’any moment he is going to eat you Hooray in front of your kids’. This was a theme all day.  Alas,  we prefer Festival of Speed, as it is less snobby, elitist and cliquey.  In as much as I deplore the rudeness, crudeness and unacceptable ignorance of the ‘Chav’ class, I have as much contempt for the ‘Upper’ classes and aristocracy.  I was witness many times that day to rudeness, ignorance, crassness and embarrassing ignorance on the part of the wealthy and elite. It does in fact make me at times ashamed to be English, as there there is no truer tosser than a wealthy English man abroad..or even at home.

Additionally, women in expensive though  poorly chosen and rather tasteless clothes abounded.  It is a sad fact, that just because you can afford ‘couture’, doesn’t mean you can ‘wear’ couture. I commented to Rachel on how many women I had seen that day with coffee brown faces. The truth is, a Mediterranean ‘tan’ really does not suit an English woman’s physiognomy.  But will they listen..no!

However, I don’t want it to appear as though I didn’t enjoy my day. I had a wonderful time, and loved all the gorgeous cars, clothes and the spirit of the event was palpable. Nick and Rachel are lovely, kind people to which my Orla warmed to, and Rachel is now a firm favourite. I was only sad I didn’t get to see as much of the racing as I would have liked, and missed Rowan Atkinson twice to my chagrin.   I took many, many pictures which I have uploaded to my Flickr account, and will no doubt be doing so for weeks. So, I wont write any more about the event, as the pictures I took speak for themselves. Anyone reading this who goes to look at the images on my Flickr album, I recommend you view them as a slide show, the link to which is at the top on the right…

However, here are one or two to wet your appetite. 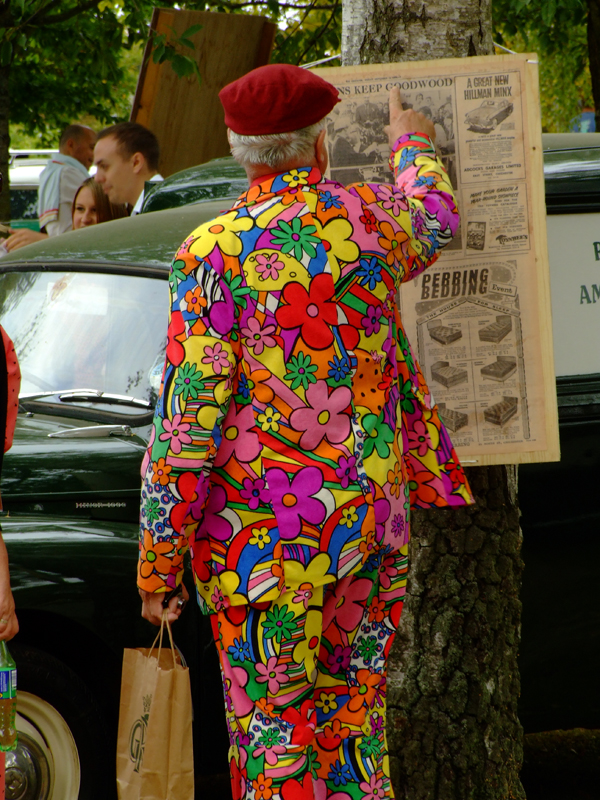