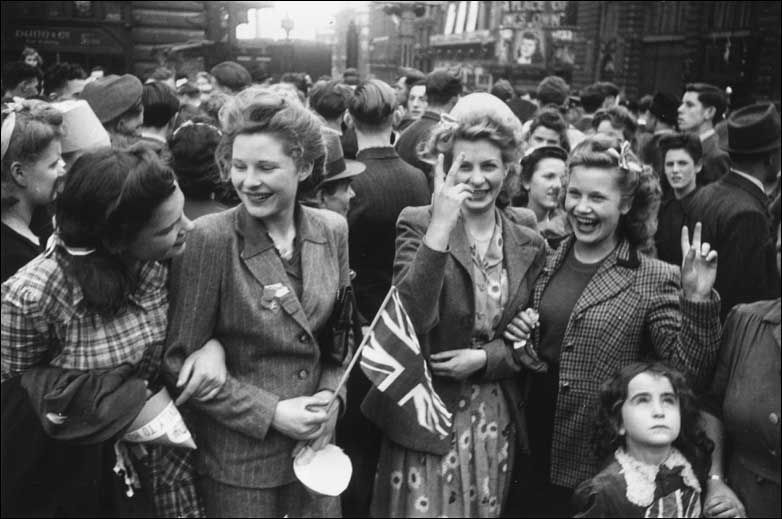 65 years ago today was VE day, which stands for ‘Victory in Europe’ and marked the end of the second world war. My Grandmother, Gladys Bennie nee Ellis, who had married a Canadian soldier after only a very few weeks of courtship, travelled from Slough to London a day early, and sat on a pavement all night with countless others to watch the Victory Parade that took place a year later.  She missed her last train home, and only made it as far as Windsor. Gladys went to the local police station and explained her situation. They very kindly made her up a bed in one of the cells (a lot cleaner in those days I should imagine), cooked her breakfast in the morning and she then made her way home.

I have many stories similar to this one told by my Grandmother, mostly about the war and her early life. I am glad I remember them, for now dementia has taken hold and she remembers very little from the past. Interestingly most of what she can remember, sometimes in startling detail, centres around her childhood in Cumberland. Conversations with her are now a cycle of repetition.  I rang her today at the home where she now lives, and told her it was the 65th Anniversary of VE Day. She remembered being there…but little else. Today wasn’t a good day. Gladys will be  90 this year, she born in 1920.

I have been looking at pictures and watching old films today of that event. People were euphoric, joyful, and full of hope for a better future, so desperately happy and relieved that the terrible days of bombings, loss, deprivation and uncertainty would be at an end.

Though I was born in the early 60’s, quite some time after the war had ended, it was still for most people of my parents and grandparents generations, a recent memory. In fact, there were still many legacies of the war around. My Aunt’s garden had an Anderson shelter at the bottom, though my sister and I were never allowed in it, there were still parts of London and Slough that retained the vestiges of bomb damage, and in fact, rationing didn’t come to an end until the mid 50’s. Most of the films on the television were about the war etc, as were documentaries, the most memorable being ‘World at War’, broadcast unbelievably during Sunday afternoons at tea time, and was graphic to say the least.

The world has changed so radically since then, it’s almost hard to grasp for someone of my Grandmother’s age. Nations have been formed, borders have changed, moved…dissapeared altogether. New technologies, cultures, belief systems and ways of life. I wonder how the world will look when I am 90?

Anyway, here is to all the souls who fought in that war, supported their country, and did what they could to rid the world of a terrible evil, that today so many have little knowledge of. And here is to my Grandma, whom I love so very much.