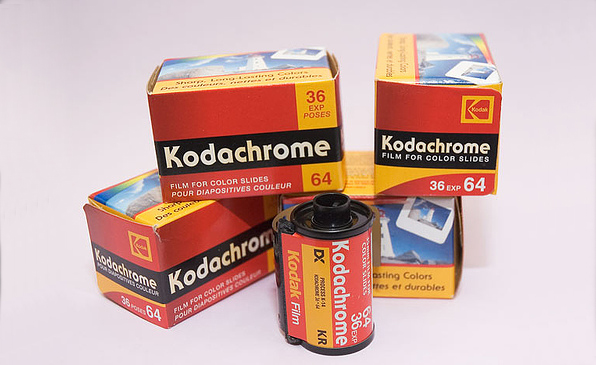 Yes…it’s true. Dwayne’s Photo, whose last ever Kodachrome lab in the US that was still in use (or anywhere in the world in fact) processed the  last roll on the 30th December, 2010.  So, if you aren’t old enough to remember, what is Kodachrome?

Kodachrome is the trademarked brand name of a type of color reversal film that was manufactured by Eastman Kodak from 1935 to 2009. Kodachrome was the first successfully mass-marketed color still film using a subtractive method, in contrast to earlier additive “screenplate” methods such as Autochrome and Dufaycolor, and remained the oldest brand of color film.

In fact, before Dwayne’s, finally shut down Kodachrome processing on December 30th, 53-year-old Jim DeNike drove from Arkansas to Dwayne’s in Kansas to have 1,580 rolls developed. The total cost for the 50,000 slides was $15,798, and all of the photographs were of trains.

This was quite a meaningful event for me. My Grandfather had been a big fan of Kodachrome, preferring slides to prints as he felt that overall the quality was better, and that they had more longevity.  I can remember clearly him taking pictures of our summers holidays and Christmas’s with what appeared to us as children as enormous black cameras, and always using Kodachrome.  As children it was very exciting sitting in from of his big pull down screen at our Grandmothers house, and watching him load all the slides in big round drums. This would be quite big family treat for us. My sister and I would sit wide eyed with our ice cream looking at these big colourful images of us on the beach, opening presents, riding ponies etc. We also had a hand held viewer, that when you pressed down a button and peered through the screen, you could see the slides. We loved this, as it was a simple device to use as children. It’s an experience my daughter, born into this digital age, will never have. I daresay she will view it with the same indulgence we viewed our grandparents love of radio as the the definitive and best medium of entertainment.

So, end of an era. Slides are now vintage and historical artifacts, and I daresay…projectors and viewers will become increasingly hard to find objects. If you have any Kodachrome slides and a projector, hang on to them, you have a piece of history.