Last night I was reading to Orla, and we reached a section where the little girl in the story put on her ‘petticoat’, and Orla asked ‘what’s a petticoat?’.  I found this interesting, for when I was five years of age I would not have asked this question. My sister and I had lots of petticoats, as we wore mostly dresses and skirts at the same age, and one wore a petticoat (or ‘slip’) under a dress.

I got to thinking, when was the last time I wore  a petticoat (or slip)? I do still have one (as I discovered on investigation), not a full slip,  but a skirt petticoat, for wearing under a skirt…naturally. Now, I don’t wear skirts any more, but when I still worked full time and wore a mid calf length skirt, I would wear a petticoat, as it prevented the skirt catching my legs and bunching up.

I wondered though, does anyone wear  petticoats or slips under dresses and skirts anymore as a day to day item of clothing? I certainly don’t think little girls do, and I don’t recall seeing them in children’s section of Marks and Spencers. In fact, when buying new bras recently, I didn’t notice  many in the woman’s section either. Is it a piece of lingerie that has finally had it’s day, and been relegated to the same  class of obsolete underwear as the chemise and bloomers (or rather ‘directoire’ knickers as my Grandmother referred to them)?  Or are petticoats now considered a ‘recreational’ item of clothing.  I rather liked petticoats and slips, they were pretty, and allowed the dress to hang better. I looked through Etsy and Google, and there were flouncy 50’s style petticoats a plenty. So the traditional ‘can can’ petticoat  is still a popular item of clothing it would seem, particularly with the increasing popularity of vintage wear.

Thinking about it, I remember being rebuked by my Grandmother (or any older woman in fact) if my petticoat was showing. And I recall once when shopping with my Grandmother, her looking at another woman and whispering to me “tsk, look a that…her petticoat is showing’, because for ones petticoat to dip below the hem of ones skirt and be visible was considered rather trashy.  How times have changed, now it is a common site to see a woman’s bra clearly through her clothes, and even the top of her knickers above the waist of her trousers.  I wonder what my Grandmother would have made of that.

I think though, I am going to buy Orla a pretty slip or petticoat to wear under her party dress, as all little girls should have a flouncy petticoat. 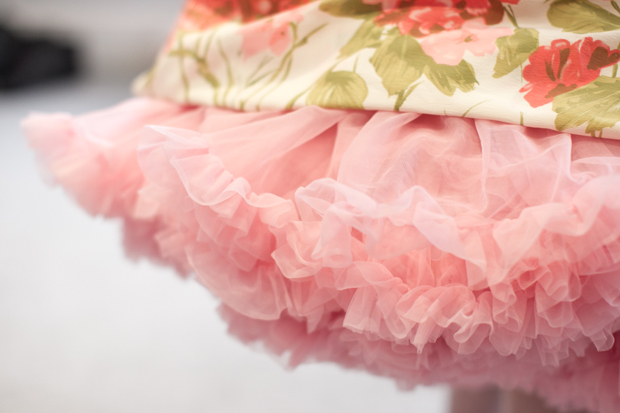